***Press Kits Go out for Wicked this Week***

I'm sending press kits for Wicked out this week (maybe early next week) the along with a 85% finished copy of Wicked. I haven't added an accoustic track that I'm looking to finish the album off with and I haven't added a lot of the guitar solos and harmonies in. But other than that the album is finished. (Besides mixing and mastering). I am thinking about re-recording "The Deadly Sleep" all together because the original is lacking something to me. It's happened before to me and if it continues I'll scrap the song and end up writing something new for the finale of the album.

It's extreme but it's always how I've worked.

I would like to take the time to address a couple of things in this update.

*Signing with a record label*
I think that me saying this in the last blog frightened people a little bit. So let me clarify and say that I am going to be shopping Wicked around for the RIGHT deal. If I run into someone who can share in my thoughts for Planet Gemini then I will have no problem signing with them. If I run into someone who is too controlling with my project I will respectfully decline. The only thing that I think might have to change about Planet Gemini is the free downloads. But I'm not even 100% sure about that. For the record it was something that Josh and I were talking about doing away with back in may/june of 2006 . Again everything is up in the air and there is no real definite answer to this stuff.

If I do keep the free downloads I may put up a small "Donations" tab near the album download. So people can donate a dollar or two for the project. The ads and pressing is going to cost me a lot of money.. I get about 30,000+ a month coming here so... If even contributed 50cents in one month it would pretty much pay for the album and promotion. I just don't feel right asking people for money. I never have and don't really like the idea of it.... So.. Record Label is my next venture.. someone who has good distribution would be nice. Overseas and in the US would be beautiful but I'm not going to get my hopes too high for anything.

One thing I would like everyone to know is that I love doing this... and... I'll never sell that short.. ever... you can be assured of that. I love Planet Gemini too much to bastardize it and I would whole heartedly call it quits if someone tried to make my music anything other than what it is. I couldn't accept that.

***Webpage Releases***
I figured that now would be as good a time as any to announce that I will be releasing a free EP (probably before Wicked is released) called "The Path of The Wicked" it will contain 5-6 songs and maybe even an outake of one of the album tracks. I will be offering this for FREE in most major formats (Including Lossless WMA) It's basically my new "BLUEPRINT" idea... just with a catchy name. I don't have a set tracklisting yet but there will be more info on that soon.

All in all I'm pretty psyched to see the reaction for Wicked. I hope you are all enjoying the demos on the myspace page
and I hope you all continue visiting and keeping in contact with me.
Above everything else the coolest thing in the world to me is hearing from all of you.

After a whole year of when the original Wicked was supposed to be released. Finally I feel that the album is ready to be polished and mastered and filled out to completion. I will be sending out press packs to those in the media who would like to get a review up of an early unmixed demo. It is very raw still but I think you will all get the idea. Get in touch with me via E-Mail to send you a demo copy of the album.

I am listening to the RC1 [Release Candidate 1] CD now and I have to say it's flowing nicely. My only gripes... it's only 58 minutes. You know that one or two tracks will be thrown on at the 11th hour (I always do that).

Here is all the techincal jergin
Wicked Discography Page

Very happy at the moment. (As UNDoom as that sounds).
This was a huge accomplishment for me and... well.. the next CD won't be a year away. That's for certain.

Thanks so much to everyone who believed in me.
I must say that everytime I thought about quitting (and it was there sometimes)
I would get an e-mail from one of you guys saying how much Planet Gemini meant to you or even just saying that you admired my work ethic. To me.. that meant everything.

Virb and Other notes..

Just wanted to post a quick "Heads up" to everyone that I have opened up a Planet Gemini Virb page. For those of you unfamiliar with Virb it's basically a less broken version of Myspace. You can add more songs and it just has a much sleeker interface. for those of you interested...


The interface is a lot more friendly than Myspace's and artists can upload a lot more tracks.
Plus it categorizes albums and such.. good stuff.

New Material is up on my Myspace page now!

I have posted two new songs up on the Planet Gemini Myspace page this week.
One is the opening track for the album called "Incantation" a friend of mine told me that it almost had a Black Sabbath meets The Beatles vibe to it. Which I thought was kind of neat. I really enjoy exploring new sounds and you'll probably notice that this is rather "solo" heavy compared to my old material.

The second song is "Silver Strings" which is a more uptempo track for the album. The vocals are way too loud and the guitar is way too low (in my opinion) but the track is there and you'll get an idea of what I'm going for.

There has been a little bit of a debate inside my head to decide if I should find a label to release Wicked with or not. My problem is that I am a very creative person and I really don't want someone telling me what/how to write or what/how to present my music to someone. I have friends that are on labels and they tend to get excited about being signed at first and then once the honeymoon is over (so to speak) They find their creativity being stiffled by a label that wants them to re-create their last album.

I fear this.. However.. I look at the positives about having a label.. (I'm sure I would get a lot more coverage from magazines and whatnot) and that would result in more people enjoying my music (which is the goal in the first place).

I'm going to shop it around and see if there are any "decent" offers... if there are not I will just continue pressing things myself under the WoeconstrictoR name.

This is album is sounding fantastic.
Thanks to everyone for the kind e-mails and awesome support
Stay REAL!
Sincerely
H 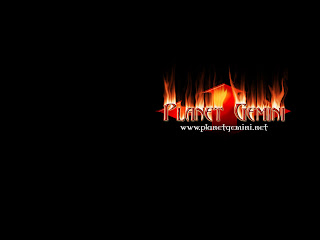 Welcome to the new webpage design

I know it's been a while since I've updated the webpage. To be honest I grew very complacent with the webpage and started updating the blog on Myspace. It was just much easier. So.... a simple solution... I got a blog for PlanetGemini.net. I want to make sure you all have the up to date news on my next release "Wicked".

As of right now everything is going fantastic with the album. I already have more than enough track and I keep writing and writing. If I have enough don't be too surprised to see me throw out a 2nd album (download only) very soon after Wicked's release.

Didn't do much studio work last week (due to car troubles) but I'll be back in full force next week and ready to get things moving on polishing up Wicked. One thing I will say (on a more personal note) I am playing guitar and drums 10x's better than I ever have. My practicing has been almost insane but it's paying off like crazy in the techniques that I've adopted.

I've also been taking Bass Guitar incredibally serious. To a point where it has become an instrument that I really want to focus on. One thing I never knew about Bass is that there is a certain tuning between the bass guitar and the bass drum (drumset) that really makes the bass punch out more. I've been playing a lot of Geddy Lee stuff (Rush) as I feel he is a bass player that really works with his drummer well. I don't play with a pick.... for many reasons really but for me I just am finding that the texture of sound with your fingers is much more dynamic and I'm really about having depth to my style. Pick playing is very lifeless and too attacky. Too much string flopping and really not enough control. So as far as Bass goes I really feel this is going to be the most "Defined" bass album Planet Gemini's ever released. Josh had a very good ear for music but I think that even he would admit that he lacked discipline to actually learn technique. (I hope no one takes that as a slight against Josh because he really was phenomenal and a very good friend).

One thing I will say about moving forward with the band on my own. It's kind of liberating to have the freedom of creating everything from the ground up. I really must admit that I missed (and still do miss) Josh's presence, his encouragement and most importantly his friendship.. however.. I think that Josh leaving the band will result in the best Planet Gemini album to date. I did a song called "Soul Assassin" in the studio and it literally took me 1 hour to finish the whole track. No waiting around for bass to get finished or having to convey my ideas to someone else. It went from concept to demo to finale in 1 hours time... and that's something that was rarely done before.

I have gotten a couple of e-mails from people asking if the new material is going to be different than the old stuff because I am doing it alone. The answer to that question is.. YES... and no.. hehe Songs like "Grim (My God of Red)" and "Moondancer" are definitely more "Me"... however.. Songs like Minus and Author of Pain bring it right back to Planet Gemini level. Crushing, heavy.. noisy.. just.. DOOM..

I want to thank everyone who has continued to check the webpage and I promise I'm going to update the blog more often now.
Thanks so much for all of the support and kind words.
You are all amazing
Sincerely
H (God of Red)
Posted by H at 5:31 PM No comments: