Update, Funny Stories and Whatnot...

Hello everyone, Sorry that it's been a while since my last update but a lot of nothing has happened.

--=Non PG Related=--
You see... I was sidelined for a couple weeks with a really insane back pain... It was my own fault really... here.. let me explain.

My girl likes that TV show "American Idol" perhaps you've heard of it? You know it's that show where 12 talentless fucks get together, dress up like sailors (or some silly shit like that) and try to sing old Stevie Wonder songs... Regardless my girl likes to watch the show (and I must admit I do enjoy the look in Simon's face as he is about to crush some poor little metrosexual boy's heart...) but I digress... So she is watching American Idol and some Aretha Franklyn wanna be (yeah right in her fucking dreams) is on stage screaming her ass off and I'm sitting on the couch and I fell asleep (yes, I feel asleep while this loud black woman is butchering some nameless pop song.. can you believe that?). I guess I was sitting in a REALLY bad position because when I woke up (about 30 minutes later) I was in a lot of pain. I went straight to bed and woke up the next morning in such pain I could barely walk. I don't know if it was the karma of watching these talentless fucks trying to sing songs that I hate.. or what.. but.. yeah.. it sucked.. I was home bound for about a week and it finally is back to normal (yet I'm still afraid to make it act up again). So.. regardless.. I was down for a good 2 weeks from this shit.

I got together with Jeff "Oly" Olson last week and we wrote a new song for The HOLY Project. It's a cool little jam although I'm not sure what to do with the vocals of it. Oly is one of the funniest people you'll ever meet. He's a lunatic (in the coolest way possible). If his career in music wasn't so successful I would recommend standup comedy. Anyways, No song name as of yet. No lyrics or anything.. Just music and a few ideas. We'll see how it goes this week when I get together with him.

--=PG Related=--I'm still cleaning up Wicked as I'm noticing there is a lot of little things that make me cringe when I hear it.. and I really want this to be as perfect as I can make it. Promo packs STILL haven't been sent out yet (to everyone) and I'm really trying to get everything finished up so I can send em' out to the media.

To clarify for everyone (as I have gotten a couple of e-mails)
The Path of the Wicked EP will be released in June. It will contain 5 or 6 songs and as of right now it will be download only (not pressed).

Wicked will be released on August 4th, 2007. They will be two seperate entities. (I realize their names are very close and it has caused a little confusion and for that I'm sorry) So keep a lookout on the webpage in June for the EP and I'll make sure to throw out tons of press releases for people about a week before it's release.

Again, thanks to everyone who writes me and keeps in contact.
Thanks for the support and be sure to check out the new stuff once it's released.
Doom Eternal
H

The Path of the Wicked [ep] details 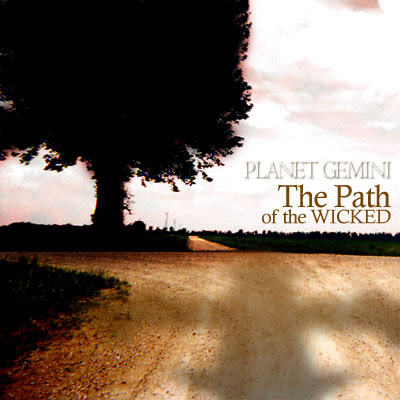 Planet Gemini
The Path of the Wicked [ep]

So here it is.. the tracklisting and coverart for "The Path of the Wicked [ep]". I only have very rough demos of two of these tracks lying around so I'm going to re-record them for the release but all in all I think that it will be a nice little "Thank you" to everyone who has stuck with me through the tough times and even tougher transitions of Planet Gemini being a solo project for a whole year.

I still do not have an "official" release date for this but I would like to have it out one month before the actual retail release of "Wicked" (The full length album that I have been working).

For those unaware let me clarify that "Wicked" and "The Path of the Wicked" are two completely separate albums. Wicked is a full length Planet Gemini release while The Path of the Wicked is almost reminiscent to the "Blueprint" projects we always used to do in the past (However it is much more polished and can basically stand as it's own album).

For those who have followed the band the tracks "Return of the Ritual" and "Can't Escape Your Eyes" were supposed to be part of the Cauldron of Fuzz IV: Oblivion project that got scrapped. They are re-recorded and are sounding very good. "Hourglass", "Where your Future Lies", "Sidetracked" and "Here in my Mind" are all new songs that I wrote for the Wicked release but they just didn't fit.

The album cover (Seen above) is a direct hommage to Trouble's Psalm 9. I've been listening to that album so much lately it's truly been an inspiration.

In other news "The HOLY Project" (which is a side project consisting of me and Oly Olson from Trouble fame) is looking like it is going to get a big injection of metal coming soon. Oly and I are planning on getting together and recording some new tracks. This should be very fun and very interesting. Personally I am thinking about changing the name of "The Holy Project" because I would really like a name that people are going to be able to find on search engines.. and.. well.. something that says "Doom" and "Gloom" a little more than that.

Again thanks so much to everyone.
Wicked is almost 100% complete (finally) and it is by far my best work to date.
and.. everything is just falling into place quite well now.

Stay Heavy and please keep in touch
Till I see you again
H (The Hand of God)
Posted by H at 6:01 PM No comments: