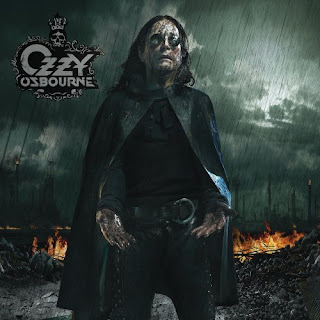 Hey everyone, I know it's not band related but I just got an advanced copy of Ozzy's "Black Rain" album and... well... I figured I'd post my thoughts on it.

First of all let me start by saying I've been an Ozzy fan for as long as I can remember. With that being said I can't say that I was particularly thrilled with "Down to Earth" (Ozzy's previous album). But as I look back through my Ozzy solo catalog there are really few shining moments in Ozzy's solo career. Of course the first two solo albums with the late (great) Randy Rhoads. The album "Bark at the Moon" wasn't terrible (though poorly produced) and "No Rest for the Wicked" was very fresh sounding in it's time. (especially when following up The Ultimate Sin which is probably one of the worst sounding Ozzy albums ever.) I liked "No More Tears" but it was obvious to me that the bloom was off Ozzy's rose at that point. Then Osmosis came out and I really enjoyed that album. I mean Geezer had a hand in writing some of the tracks and some of the lyrics were very dark and not just about Ozzy wanting to "Rock & Roll" or... him informing us that he is not indeed as "Crazy" as everyone thinks. So that brings us to Ozzy's latest release "Black Rain" here are my thoughts.

Okay, the album starts out with some industrial sounding drums and it's got a plodding beat and decent generic Zakky Rocker riff. Ozzy's actually putting a little effort into the chorus which is nice to hear. But opening the album with this track is something I question. Ozzy needs some help with songwriting to (and this goes for the whole album really) someone needs to inform Ozzy that some of his greatest tracks of all time didn't have a chorus. So basically you can read a songtitle on this album and know that that title is going to be sung about 40 times during the song. Every track on this album is Chorus driven. It's like Ozzy just wants people to "sing along" during shows. Hell, there are even tracks where he includes hand clapping/stomping and the usual Ozzy "Hey" that he does live. These songs sound like they were written with live performance in mind (which isn't always bad but... not particularly intriguing to me).

The rock songs are watered down for the most part and the ballads are Ozzy's attempt to be John Lennon/Elton John and it comes off rather poorly. The album isn't without it's moments though. As I sad the first song was decent (if you throw away the "Not Going Away" that took place every 8 bars into the song.). Black Rain had a little flare to it and was slightly more ambient for Ozzy. I thought Zakk dropped the ball on the chorus on this song. It sounded like they wanted a Middle Eastern feel and Zakk just went with his normal "Rock" solo. Ya know playing the major scales really fast... Zakk is great but it'd be nice to see him think outside the box for the Ozzy stuff sometimes. (Though I'm sure it's not all his choice).

I will say this Mike Borden has improved greatly since starting to play with Ozzy. If you listen to Borden back in the Faith No More days he sounded sluggish and sloppy a lot of the time. This guy was right on point on this album... very good performance for both him and Blasko (Bass Player).

My favorite tracks on the album were... Black Rain, Not Going Away & The Almighty Dollar. Everything else on this album is a "take it or leave it" track and while nothing truly "Sucks" on this album... I don't feel that this is music that we will be talking about in 20 years. (much like very few people talk about "The Ultimate Sin" now.)

I'd love to see Ozzy get together with a young heavy songwriter. Someone who grew up listening to his Sabbath stuff and understands what Ozzy should sound like and I'm not talking about making him sound like Black Sabbath again... I mean.. it'd be great but that's not Ozzy today... Ozzy needs someone who understands what metal music should sound like. It's obvious that everyone around him is very far removed or not giving their true opinions because of his legacy.

Again, this is all my opinion... and I really do not HATE this album. But, I highly doubt I'll be listening to it frequently... and I couldn't fathom talking about it's "greatness" years from now.

4 out of 10 in my book
Listenable but not that enjoyable.
Let me know your thoughts when you hear the album.

People should read this.

I totally disagree. This is by far the worst album not just by Ozzy, but by almost any other artist ever. I have been a huge Ozzy fan since I was small and after the last album I had decided that I would no longer be supporting Ozzy's lifestyle while he churns out crap. I read several hundred reviews and most said this was "great", "the old Ozzy is back",blah, blah, blah...The old Ozzy is back alright. I think he sounds like a 60 year old trying to rock...oh wait he is.
I bought this crap the day it came out. I listened to it once and could hardly stand it. I gave it another chance several months later. It still sucks. There is not one good song on there.

We have the typical "I love Sharon" songs, the "I'm a rebel, and I'll never stop rockin'" songs. these are sandwiched between his songs about his vast knowledge of the American political scene and or the war.

I will never buy another Ozzy album after this. Complete bullocks. Go back to England Ozzy, take Sharon with you.

Your review could have fit Ozzmosis. You can listen to Ozzmosis without vomiting and it does have a few good songs. After that he should have just packed it up and retired.

"This is by far the worst album not just by Ozzy, but by almost any other artist ever"

I mean, come on dude.. That's a little stretch there. This album is not really a "Classic" but it's not one of the worst albums in the history of music either. Hell, I don't even think it's the worst album in Ozzy's catalog. I think that this album is much better than "The Ultimate Sin" and even the last album Ozzy put out. (The name escapes me at the moment, but it had "Get's me Through" and "Junkie" on it).

I will agree Ozzy has a formula. As a matter a fact I will agree with almost everything you said. Ozzy somehow still writes songs about how "Misunderstood" he is.. "I'm not an evil guy... really" it's like... Ozzy no one thinks you're evil anymore.. Let's face facts dude you're about as evil as a muppet. But, hey... whatever I guess.

The "I want to be John Lennon" ballads are insufferable. Still though.. Almighty Dollar, Silver, Not Going Away, Black Rain & Trap Door are all semi-decent tracks... and if you have the bonus material "I can't Save you" and "Nightmare" are also pretty good.

While your opinion is not without it's merit. I think that you expect too much out of Ozzy. I haven't hear a GREAT Ozzy album since Diary of a Madman and that was in 1982. Everything else has been mostly filler with moments of greatness sprinkled over it here and there.

Yes, Ozzy is as evil as a dinner salad. Prince of Darkness? Maybe if he is in a closet and the light bulb burns out while he gets lost looking for his boots...

I guess I do expect too much of Ozzy. That is my folly. I think The Ultimate Sin is OK. It took 10 years but it grew on me. Jake E. Lee is underrated. My fav album by far is No More Tears. I really dig many of the tunes on No Rest for the Wicked. I am flip-flopped with you on the last two albums though. Down to Earth really sucked but it was much better than Black Rain. I really can't even listen to it.

I have been listening to his last albums with Sabbath lately and you NEVER hear that stuff on the radio. You always hear paranoid, Sabbath Bloody Sabbath, War Pigs, and a handfull of others. If you really listen to them they aren't that good. His last 5 or so albums with Sabbath are amazing. Some of the lyrics are lame, but thats probably because Ozz wrote them and not Geezer. I think Zakk is board with Ozzy and just does it to stay in the public eye. He is not "hungry" anymore.

I know Black Rain is not the worst album ever. I just like to say things like that. I feel that it is by far HIS worst effort. It is a tie with Nostradamus for the worst album I have in my possession.

Ha, I can totally agree with what you're saying. I think Zakk needs to take some time off from metal. All of his riffs are sounding very similar. The guy is an amazing guitar player but I'm finding that even his Black Label Society stuff is sounding quite watered down lately.

My favorite album from Sabbath is "Sabotage" followed closely by "Sabbath Bloody Sabbath" so I am definitely a fan of the older Sabbath material. While you can't deny the greatness of the first three albums I really feel like the band hit their stride on 4,5 & 6. I like 7 & 8 a lot but I do think they got very experimental on them and that a lot of people couldn't handle them moving away from the classic Sabbath sound.

Still though Technical and Never say Die wielded some great tracks. Gypsy, Juniors Eyes, You Won't Change Me, All Moving Parts, DIRTY WOMEN!.. tons of great stuff on those albums.