Hello everyone, I figured that I would take some time to write up a blog about some things that have been going on with Planet Gemini and give you all some insight to the release of the new album.

As of right now the album is on target to hit it's release date. I have the album completely written and recorded and right now it's just mastering the material that is going to take a while (seeing as the company I use to press this stuff with usually takes about a week to do my pressings).

I have been recording a couple very cool bands and I must admit that it's been a little more time consuming than I anticipated. However, there is plenty of time for me to still do the Planet Gemini stuff (as it is my number 1 priority). I was pondering even adding one more track to the album at the last minute but we'll see how that goes.


The other day I was bored in the studio and took some pics of my drumkit on my phone's camera.. For those interested it is a Mapex Studio kit. It's maple with a single layer of Oak. Most people that hear this kit can't believe that the bass drum is only a 22 because it is so heavy sounding. I just outfitted it with new aquarian heads (which sounds very nice but I still think I like my Remo Pinstripes better) As you can see I use all Zildjan Cymbals accept my Hats which are 13inch Sabian Paragons. I also have a Wuhan 20inch China.. they are cheap cheap cheap but sound amazing to tape, and that thing has lasted me about 2 years now so it owes me nothing. 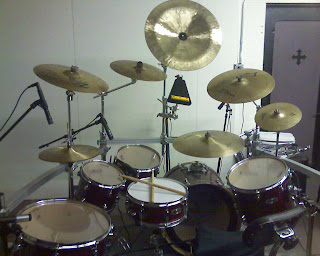 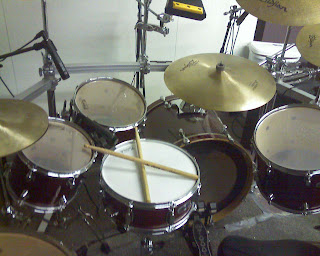 I know before you say anything I do tend to play my kit more in a "Jazz" position but it's really just as much done for sound as much as comfort. Having the rack toms lower tends to give them more low end in the mix. Also the 16 inch floor tom on the left was originally done for Oly Olson (of Trouble fame). Oly plays Righty/Lefty and liked a floor tom on that side so I decided to put one over there.. I got so used to it being there that I use it often myself now. It's great for accents... and if you are an open player (which I do try to be)... it is rather convenient. The sticks on the snare are the M2 Marching sticks which I do use on the heavier "Appice-ish" tracks but... I have been a big fan of the Buddy Rich stick from Vic Firth and also the Neil Peart Sticks from Pro Mark (I swear those things can't be broken).
Next time I'll do some photos of guitars and basses.
Thanks for stopping and in
Sincerely
H
Posted by H at 5:09 PM